Gary Nissen’s approach to philanthropy feels like it’s soaked into his DNA. He talks about giving his time and money in a way that seems to beg the question: Why wouldn’t someone do this? Nissen’s mindset likely came from the way he was raised, a household where giving back was both important and expected.

“My mother was a big inspiration,” reflects Nissen. “I had a lot of chats with her about the responsibilities that come with privilege and success. She was just an amazing, kind, generous person, and she inspired a lot of people.”

Nissen, who describes himself as “semi-retired,” is the former head of Dome Britannia Properties. However, he seems to keep pretty busy with his company Canadian Avatar Investments and his many philanthropic endeavours. He’s a longtime champion for Inn from the Cold, where he created Claire’s Campaign in honour of his mother. The charity provides emergency shelter services and long-term housing solutions for families, and programming for young mothers and children.

Nissen says that working with Inn from the Cold helped he and his partner, Dina Klopp, become more aware of the issues facing Indigenous Peoples in Alberta. “I'm learning more about what many of those people have been through with residential schools,” he says. “I’ve had a chance to meet a number of families to understand a little bit more about the struggles they go through. So, it’s something I’ve had on my radar for a while; how can I maybe help a bit more in this area?

“I also like to support initiatives that give young people a hand up, not a hand out [Nissen is also a huge supporter of Big Brothers and Sisters] so the Indigenous Scholars Academy felt like a natural fit.”

The unique opportunity that Nissen is igniting is an innovative program created by the Faculty of Social Work called the Indigenous Scholars Academy (ISA). The ISA will partner with Indigenous youth who have “aged out” of foster care, providing them with culturally based supports, educational opportunities, and the personal and economic support needed to successfully pursue a social work degree.

“I’m thrilled that Gary Nissen has chosen to support this program, which I believe will address a number of important issues for the social work profession, for the university and for Albertans,” says Dr. Jackie Sieppert, dean of the Faculty of Social Work. “It’s really a first for Canada.”

The ISA will be led by Sieppert, along with Indigenous Elders and community leaders.

Approach could lead to transformational change for child welfare in Canada.

First Nations, Inuit and Métis children under age 14 make up 52.2 per cent of all children in Canadian foster care. In Alberta, a staggering 73.4 per cent of children in care are Indigenous.

“Addressing this issue has been a primary concern of the social work profession, and indeed of this faculty,” says Sieppert. “The scholars we’ll be recruiting are experts in the child welfare system through their lived experience. Who better to lead needed change in Canada’s child-welfare system than someone who has lived it?

“In a way, this program isn’t really ‘for them’ — it really will be ‘by them.’ I think it could be transformational.”

Social Work’s Indigenous Scholars Academy will also help to address the issue of under-representation of Indigenous youth in post-secondary education.

Program will integrate Indigenous perspectives and ways of knowing into curriculum

In creating the ISA, the Faculty of Social Work will also be reshaped with the goal of preserving Indigenous culture by integrating Indigenous perspectives, histories and language in the academy’s curriculum.

“In consultation with traditional knowledge-keepers, we intend to create, implement and evaluate practices for the increased recruitment, admission, enrolment, retention and success of Indigenous students,” Sieppert says. “Our goal is to ensure that the [faculty’s] infrastructure and curricula respect Indigenous cultural protocols, minimize barriers to student engagement, and increase opportunities to work with Indigenous communities as authentic and equal learning partners.”

For his part, Nissen hopes the ISA will also “flip the script” on racist narratives and inspire more compassion.

“Part of this, for me, is to educate other people and open their eyes a bit, too,” he says. “To say, ‘Let's not be judging. Let’s try and understand.’ There are multigenerational challenges to overcome, and it might take a generation, two generations or three generations to really support Indigenous people to get back on a solid footing.

“Racism is certainly one of the things that bothers me the most. People are people, and everybody deserves a fair chance.”

You can contribute to the Indigenous Scholars Academy on our website.

The gift from Gary Nissen is part of the university’s ongoing fundraising campaign, Energize: The Campaign for Eyes High, the University of Calgary’s most ambitious fundraising campaign in its history. Funds raised through the campaign will support student experiences, research outcomes and community connections. Together we are fuelling transformational change for the University of Calgary, our city, and beyond — inspiring discovery, creativity and innovation for generations to come. The campaign is currently at $1.26 billion toward its overall goal of $1.3 billion.

Why I'm an Ignitor: To be part of the energy 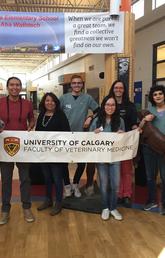 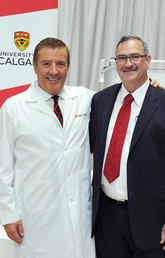