Alan Mathison Turing, OBE, FRS, often called the "father of computer science", was a British mathematician and pioneer of computing.  Turing is best known for his work in a number of scientific fields: he solved the Decision Problem in mathematical logic, invented the standard model of computability now called the Turing Machine, and he made seminal contributions to cryptanalysis (code breaking), to computer architecture, to the philosophy of computation and artificial intelligence, and to mathematical biology.

During WWII, Turing's work at Britain's top-secret Code and Cypher School at Bletchley Park, was instrumental in breaking the German Enigma code, which helped end the war.  For his services, which remained secret throught his life, he was awarded the OBE in 1945. Turing applied his experience with electronic code-breaking machines at Bletchley Park in his post-war work on some of the very first electronic stored-program computers ever built.

Turing was openly gay at a time when homosexuality was criminalized.  His prosecution and conviction in 1952 for "gross indecency" led to the loss of his security clearance.  Turing chose chemical castration instead of imprisonment as his sentence, and died in 1954 of an apparent suicide.

Turing was born on June 23, 1912.  The Departments of Computer Science and Philosophy, with support from the Faculties of Arts and Science and the Pacific Institute for the Mathematical Sciences, marked Turing's centenary with a series of events throughout 2012.  The lectures were aimed at a general audience and are open to the public.  You can watch them on mathtube.

Nicole Wyatt discusses Turing's interest in the possibility of machine intelligence and the 'Turing Test'.

Alan Turing, the Politics of Sexual Science, and the Making of a Gay Icon

Chris Waters discusses Turing’s sexual proclivities and their meanings in the context of his times, and the shaping of Turing’s posthumous reputation as a gay icon.

Alan Turing and the Patterns of Life

Przemysław Prusinkiewicz explains reaction-diffusion, a mechanism for the emergence of complex patterns in chemical reactions proposed by Turing, and now a central concept in the study of patterns and forms in nature.

John R. Ferris discusses Turing's work with British codebreaking during the Second World War, especially work at Bletchley Park in developing cryptanalytical machines for use against Enigma in 1940–41

Michael R. Williams describes the code-breaking machines and early electronic computers that Turing helped design at Bletchley Park and later at the NPL and Manchester University.

Alan Turing and the Decision Problem

Richard Zach discusses Turing's abstract, mathematical model of computability and his proof that no Turing machine could solve the decision problem of logic.

Posters for ATY2012 events in Calgary, designed by Mark Lyall. 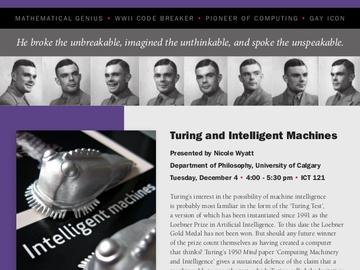 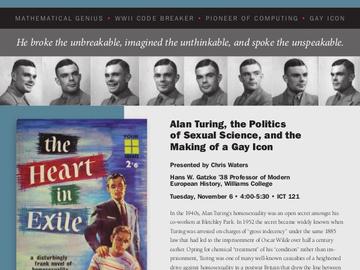 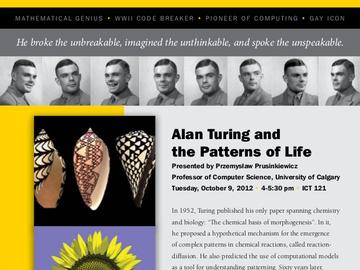 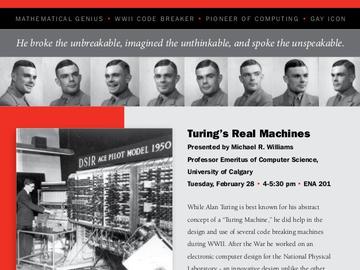 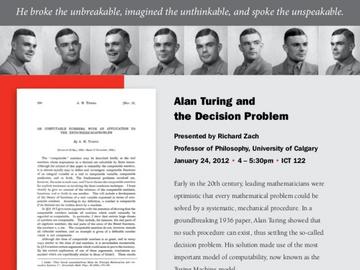 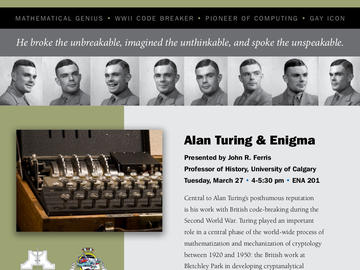 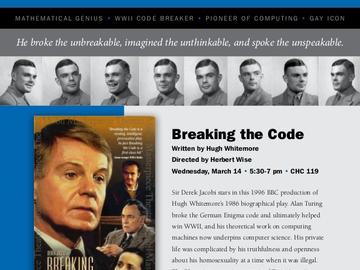