The Vagina Monologues: Women's issues, but not just for women

While the cast and crew have changed over time, the message of female empowerment has stayed the same. Despite being written 23 years ago, the production is still as relevant as ever.  On Nov. 7, the Women's Resource Centre and the Werklund School of Education join forces again to present The Vagina Monologues from writer, artist and V-Day founder Eve Ensler.

Her award-winning play is the result of 200 interviews of women from all walks of life. This year’s monologues will be presented by 21 cast members from the campus community and beyond.

"It's an essential play," says Dr. Shirley Steinberg, PhD, a consultant for the production and a research professor of critical youth studies in the Werklund School of Education. "But of course, I wish we didn't need it."

ince its debut in 1996, The Vagina Monologues has evolved with the times by featuring new or updated monologues that reflect the ever-changing spectrum of women's issues around the world. Examples of these revisions include monologues focusing on violence against trans women, missing and murdered Indigenous women, the pink tax, body positivity, and the #MeToo and #TimesUp movements.

"Some of the original monologues were based on women's stories from back in the 60s and 70s," says Sherry West, a long-time cast member, assistant director for this year’s production and an events co-ordinator at UCalgary’s Haskayne School of Business. She recently wrote a piece of her own that will open this year’s production.

"We talked about whether they were still relevant. And the fact is they all are, because not much has changed. That's why we have to keep doing this year after year."

A rewarding experience for all

A common misconception is that, because it voices the almost-universal experiences of women worldwide, The Vagina Monologues is only for female audiences. Steinberg disagrees.

"What's beautiful is when we have an audience where men are laughing their heads off and kind of crying at the same time, just like we are," she says. "It's neat to be able to see men get in touch with their understanding and knowledge of women — and change their perspectives."

The Vagina Monologues has proven to be a transformative, healing experience for cast, crew and audiences alike. Steinberg notes that numerous members of the show started as audience members who then felt compelled to join the production and share these stories with others.

The play has also inspired many to make life-changing decisions. The production’s director, Shannon Jones, is one of those women; after getting involved, she decided to pursue a master's degree in education. "[After] meeting Shirley and other women in the cast, they really inspired me and encouraged me to do it," says Jones.

She is now also considering a PhD, with a focus on using theatre as a form of education. She says this move was also spurred by The Vagina Monologues, "because it's a very fun play, but it's also a very educational play."

Now in its seventh year at UCalgary, this is the only annual production of The Vagina Monologues in Calgary. The play has become deeply embedded in the campus community and the groups involved.

Nanako Furuyama, co-ordinator of the Women's Resource Centre, says that the production is always in high demand. "Every year, we receive a lot of requests from past cast members and community members — 'When are you going to do it again?' So, it's become a tradition on campus."

Sherry West, assistant director of The Vagina Monologues, introduces her castmates during rehearsal. 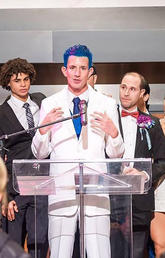 Musical based on UCalgary staffer's prom comes to Calgary in 2020