A Half Century of Wagonstage

For 50 years, UCalgary’s Wagonstage Children’s Theatre company has trained actors, directors, writers and designers — and delighted kids and adults alike with their highly original outdoor performances. Since 1971, emerging artists from the Drama program at the School of Creative and Performing Arts (SCPA), in partnership with the City of Calgary, have been involved in this beloved endeavour, which has launched arts careers and created transformative experiences through live, collaborative performances. This summer, Springboard Performance and One Health at UCalgary are on board as partners.

To celebrate this milestone and help raise funds for an endowment that will support a robust future for Wagonstage, theatre professor and playwright Clem Martini has drawn upon archival sources and crafted a book that includes photos and interviews from dozens of the founders and legends behind the endeavour. Here, three first-person excerpts from the new book (available to Wagonstage UCrowdFund donors) capture the love and exuberance of three of the company’s dearly departed originators who initially developed Wagonstage, Joyce Doolittle, Kathleen Foreman and Brian Dorscht.

“It is a summer day in Calgary in the 1970’s and Riley Park is teeming with life – families, lawn bowlers, lovers, malingerers and kids. At the south end of the park, near the popular Kensington Avenue shopping district, planted in the green grass and back by bushes and trees, a small band of performers have attracted bystanders to their show. A small young man clad in the traditional costume of Pedrolino – a stock character of the Italian street theatre of the 16th century Commedia dell’ Arte is eating a large bowl of spaghetti – loving it, resisting it, embracing it, wearing it, tearing it – and his audience is in stitches. There is no spaghetti and no bowl, but the talent of the young actor, Wes Tritter, convinces us that no better pasta ever existed. Other familiar human archetypes appear and delight the crowd: the doctor, the captain, the gossip, the old man, and the lovers. This is Wagonstage. The actors are students from the Department of Drama at the University of Calgary and their job for the summer is to prepare and present a free play in the city’s parks and playgrounds. The troupe is directed by a professor in the Department of Drama, Philip McCoy, and they are paid by the city’s Parks and Recreation Department.

Isn’t it surprising that a modest experiment in town and gown cooperation still flourishes after all these decades?”

“In the summer of 1980, Clem Martini and I were cast members of the Wagonstage Theatre for Young Audiences troupe. It was Clem’s second summer but for me it was a summer of ‘firsts’; first paycheque as an actor, first collective creation of a play, first taste of artistic independence and responsibility, first tremors of belief in myself as an artist, first immersion into the ancient traditions of the traveling theatrical troupe.

As members of Wagonstage we lived and managed the physical and monetary restrictions of an itinerant company. Wagonstage’s small-budget portable productions embrace minimal aesthetic design with props, costumes and set pieces that are portable, durable and multi-purpose. Imagination is the key ingredient for both the actors and the audience to transform these basic elements into the epic adventures and compelling stories of the performance. We worked hard that summer, laughed a lot and joined the long line of Wagonstage alumni to pursue careers in the arts through which Theatre for Young Audiences would be a continuous thread. Who could have predicted that our work would eventually bring us back to Wagonstage many years later or that, for the next decades, we would become the nurturers and advocates for the project?

Wagonstage is so many things. It is a Theatre for Young Audiences summer touring troupe. It is a post-secondary theatre education. It is a cultural partnership between a university and a municipality. It is student summer employment. It is pre-professional work experience.  It is community outreach. It is cultural volunteerism. It is live theatre. It is embodied tradition. In addition to the connection to the ancient roots of theatre, Wagonstage is a product of the development of Theatre for Young Audiences as it has evolved in Canada.”

“My introduction to Wagonstage occurred in the early 1990’s. It was Saturday morning and I was walking with my children through Riley Park, a large popular green space in Calgary’s city centre. I remember the thick green grass still being quite damp with morning dew as we walked on our regular path towards the playground equipment. Looking ahead to my destined monkey bars, I noticed a group of young people unloading materials from a City of Calgary van. A young man ran towards us and leaned towards my daughters asking, “Hey do you want to watch a play?”

It was one of those surprise moments life gives you, and we could do nothing but accept. As an avid children’s theatre professional recently moved from Ontario, and a newly interested fan of the genre due to my parenting role, I was interested to see how this Saturday morning ad-hoc performing venue would work.    I soon discovered that these people were Wagonstage cast members looking for an audience, and we provided it for them. The show was Simpleton Marvelous, written by Michael Green, and there it was, performed for only a few of us only feet away from the end of our blanket.  The actors performed the full play directly to us, and the chills of the morning soon left us as we became engrossed in the performance.

I remember the images surrounding the performance — the look on my children’s faces knowing these actors were putting on a show just for us; their total enthusiasm watching the actor’s performances and laughing at some of the antics therein; the abandonment of the loss of time or place as we entered into the world of this outdoor play; and how, at the end of the performance, we got to talk to the actors about the play and about Wagonstage, and later as a family, had a new topic  to discuss while we continued our Saturday activities.

Little did I know that my work as an artist would reconnect me with Wagonstage in a variety of contexts over the next 20 years: first as an audience member on that wet Saturday morning; as a member of the TYA community when I founded Calgary Young People’s Theatre in 1992, as a guest director for Wagonstage for 3 seasons and as the Wagonstage Coordinator for the City of Calgary. The final irony was the opportunity to coordinate the Wagonstage 35th Anniversary Celebrations, and direct “Simpleton Marvellous” as its 35th production, the same show I had seen with my children several years earlier.” 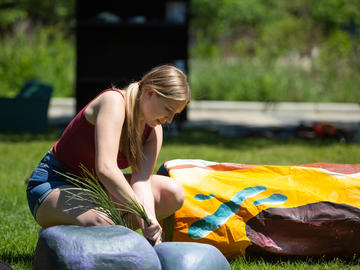 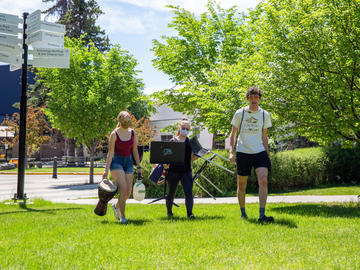 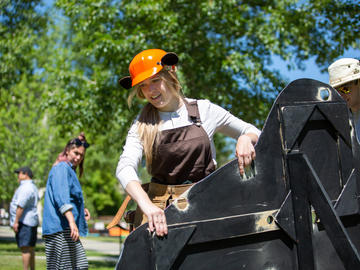 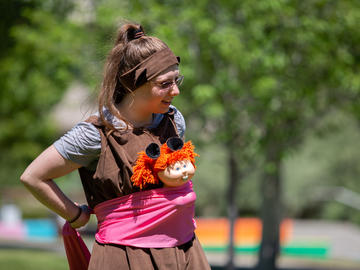 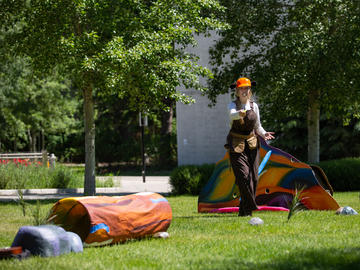 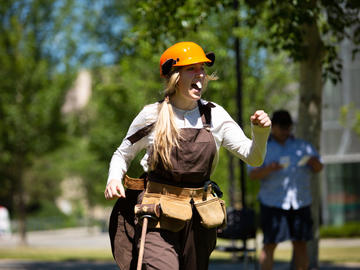 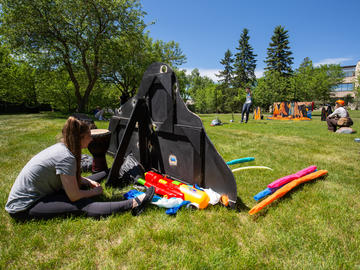 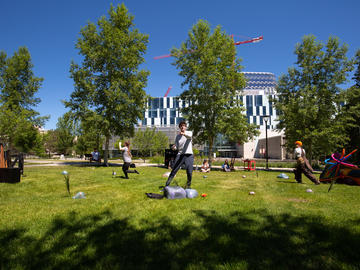