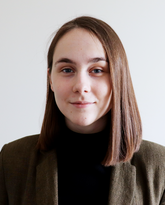 Karolina Krisandova is a Political Science and International Relations major hoping to pursue a Masters in Global Affairs with an emphasis on global justice. Karolina credits her time at the Women's Resource Centre (WRC) as an experience that has helped her learn and apply academic theories in tangible and purposeful ways.

Karolina joined WRC's Volunteer Engagement and Development Team in the winter of 2018. With just one semester of volunteering under her belt, Karolina enthusiastically and dedicatedly took the plunge and became an Events and Education Team Leader, returning every semester to reprise this crucial role. While her main priority is providing her teammates with guidance and feedback on projects, Karolina also successfully facilitated events like Critical Lens. Fellow volunteers speak fondly of Karolina and her unabashed love for Star Trek and Star Wars, mentioned often in conversation and injected with insightful feminist and political critique. She notes Critical Lens as a fun and memorable project that aimed at critically evaluating the media we consume, while still being able to enjoy it.

Being a team leader proved pivotal in recognizing her intercultural competence, both in terms of its strengths and shortcomings. Karolina is candid in discussing the challenges of grappling with her immigrant identity and is appreciative of the opportunities at the WRC that have helped her renegotiate her relation to her own culture while increasing cultural self-awareness and improving intercultural communication.

Karolina's peers regard her as a kind, empathic, patient, and responsive leader who is always willing to lend a hand or be a listening ear. Despite the online transition at the heels of a global health crisis, Karolina continues to skillfully engage and support her teammates with great grit and grace. She is an exceptional role model and inspiration to those around her, made evident in her peers' nomination for this honour and recognition.