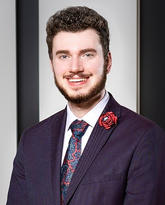 Bachelor of Arts in History and Political Science

The political and legal worlds are a fascination of mine, and I believe they can be a catalyst for positive social change.

Over my summers, I have also had the opportunity to work within my field. The summer after my first year, I worked for the Legislative Assembly of Alberta, then the next as a Ministerial Intern for the Ministry of Culture and Tourism. In 2018 I was hired as a Stakeholder Relations Intern for the Alberta Office of the Premier.

In March of 2020, I was elected as President of the University of Calgary Students’ Union, an organization with 26,000 constituents and an operating budget of $20 million. As SU President, I served as students’ voice to all levels of government and was responsible for the stewardship of the organization’s political and business functions. Soon after my election, the Covid pandemic worsened significantly, with university classes going online and society locking down. What started as a surprisingly different term than I had imagined, eventually yielded the work I am most proud of.

During my term, I founded the Covid Student Relief Fund worth hundreds of thousands, resolved an eight-year legal dispute with the institution, authored the university’s first Student Bill of Rights, helped defeat a provincial government proposal to remove institutional power from boards of governors, and successfully influenced a number of other financial and academic policies for the benefit of students.

However, what I am most proud of is the renewed trust in the Students’ Union. For years the SU had languished with decreasing student support and engagement. During a pandemic, the situation could have continued to degrade, but instead, the opposite occurred. Due to the successes of the SU, we witnessed a huge renewal of support. At the completion of my term I was heartened to receive over 200 messages from students thanking me for my work.

When I am not photographing ghost towns, you can find me researching historic architecture and city planning in archives, cooking a heavy cream sauce, or composing for string instruments.