18 UCalgary grads have won the prestigious award since 1969

To win a Rhodes Scholarship — as UCalgary’s Emily Boucher and Manpreet Deol just did — requires an unusual array of talents, excelling not only academically, but also in extracurriculars (sports, music and artistic pursuits) as well as “moral force of character.” These two women, along with nine other Canadian recipients, possess these attributes in spades and will head to study at Oxford University in the fall of 2020.

The scholarship — famously won by Chrystia Freeland, Rex Murphy, John Turner and more than 100 other Canadians — pays for two to three years of post-graduate study at Oxford University in England. Selected from a pool of hundreds of applicants nominated by their colleges and universities for their academic excellence, ambition, and promise of leadership are the latest to follow in the steps of 16 other UCalgary alumni who, since 1969 (when Luigi DiMarzo became UCalgary’s first recipient) have become Rhodes Scholars.

Where are these high-flyers today, and did this prestigious award that’s been around since 1903 truly alter their lives? From his obsession with clotted cream on scones (we’re looking at you, Yan Yu) to supping on mushy peas in Harry-Potteresque dining halls (too many alumni to list), we caught up with a few of UCalgary’s Rhodes scholars. Herewith:

Bogdan Knezevic, BSc’15, completed his Rhodes Scholarship earlier this year and is now the artificial intelligence lead at the Creative Destruction Lab in Toronto. Obtaining a PhD in clinical medicine from Oxford, this extraordinary student-athlete (also a world-class swimmer) now works with investors, advisers and scientists to help nurture 25 science and tech ventures a year. He explains how a Rhodes Scholarship flipped his world around.

“It thrust me into the world of data (broadly) — both from a technical perspective of how to work with data to how to build machine-learning algorithms for specific purposes,” he says, “but also from a broader perspective of where we, as a society, are today — from a data standpoint. My time at Oxford was definitely life-changing in that it was also a real powerful time of self-reflection.”

As for three top lessons he learned at Oxford, Knezevic writes in an email: “The first is how we in the West view the world is vastly different from how people elsewhere see the world. I’ve always been aware of this (I am an immigrant to Canada myself), but my time at Oxford underscored this significantly.

“Secondly, time is a luxury and privilege, and lastly ... there are a million different ways to slice things, to approach a problem, to evaluate a solution. They each add value in a different way, so spending time to think about the way you go about tackling a problem is very important (not just what problem to tackle).”

Rahul Arora, BHSc’19, currently a DPhil student in engineering science at Oxford University, is focused on medical machine learning. Besides biking up Oxford’s notoriously steep Headington Hill to the hospital campus, “which makes the trek from main campus to Foothills seem gentle in comparison,” Arora says, “being embedded in a deeply international and interdisciplinary community which Oxford provides means the perspectives and conversations that happen here have already fundamentally changed how I see the world.”

As for advice for new recipients: “There are 10 weird, liminal months between when you’re named a Rhodes Scholar and when you start in Oxford. Don’t think about the impending transition too much. Savour living the fullest life that you can in Calgary before your weird, crazy, awesome time in Oxford sweeps you off your feet.”

When Yan Yu, MD’14, went to Oxford to pursue an MBA and a master’s in public policy, he “wanted to better understand the larger social structures and underpinnings of our health-care systems, from both the perspectives of industry and government.”

Yu admits his experience at Oxford didn’t alter how he practises medicine. “The University of Calgary takes full credit for that,” he stresses, “but it did drastically impact how I view the world. We doctors can live in our own little bubble, but at Oxford, I was reminded how many blind spots I continue to have.”

While a Rhodes Scholarship has been known to command — dare we say? — reverence in certain circles, Yu is quick to remind us that “it's what we do in life and what benefits we bring to others that matter in the long run. The Rhodes Scholarship is really just one road (no pun intended) to achieve this end goal. It is not a reward for past accomplishments, but an investment in the future.

“I’m incredibly grateful to have had this opportunity and am thrilled for this year’s winners!” 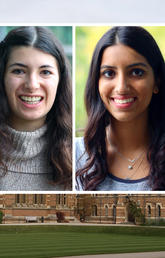 Rhodes scholarship applicants highlight some of our most outstanding students