Video game format is a fun distraction for children during treatment

Getting children to sit still and complete a boring task for more than an hour is a challenge. But if you make the boring task into a video game? No problem. A university team won $10,000 at the Innovation 4 Health competition for doing just that, making treatment easier for children with neuromotor disorders.

The challenge the team tackled was to improve the way Transcranial Magnetic Stimulation (TMS), a tool used to stimulate areas of brain, is used to map the brain in children with neuromotor disorders such as hemiparetic cerebral palsy, a condition when children have some paralysis on one side of the body. The map of the brain is then used to guide rehabilitation and evaluate treatments.

“The traditional way brain mapping exercises are delivered is extremely boring for the child and they often lose focus during tasks or simply do not want to do it. It’s also inefficient because often what should be a one-and-half-hour session turns into three hours, which is costly and unpleasant for everyone involved,” says Joice El-Mehallawy, a fourth-year Faculty of Kinesiology student on the team.

Other team members include University of Calgary students Abigayle LeFranc and Lilly Pollreis, both from the Faculty of Science; and Pauline Mouches, Alejandro Gutiérrez, James Nguy and Jermey Bilic from the Schulich School of Engineering.

To solve the problem, the team created HappyMapper, the first-ever compatible video game interface which allows the child to play a video game using their electromyography or EMG, the electrical signal that you get from the muscles when they are measured by electrodes. The signal is displayed as waves and are viewed on the display screen of an oscilloscope.

“The child used to simply just watch the oscilloscope reach a specific EMG, but with HappyMapper they can now play a video game,” says El-Mehallawy. “The game can also be adapted to the clinician’s needs.”

Remarkably, the team did the bulk of their work during the 72-hour health hackathon in the university’s MakerSpace, where teams must create a prototype leading up to a public demonstration of their work. The team presented to a panel of judges as well as the public at Telus Spark, winning $10,000 for best overall out of 26 teams in three categories.

“We are hoping to grow HappyMapper into a business which can be used by researchers and clinicians and to eventually collaborate with major TMS-producing companies to improve the way brain mapping is delivered, to create an engaged, efficient and fun experience,” says El-Mehallawy. 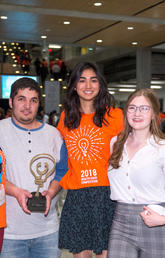 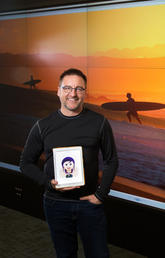 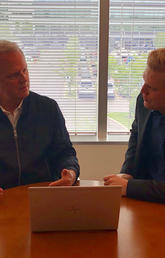