Parenting books, magazines and apps are filled with tools to help parents keep track of their child’s developmental milestones. Parents are often particularly concerned about their child’s language and communication skills. But what does it mean if your child doesn’t meet these early milestones?

New research published in the Journal of Developmental and Behavioral Pediatrics suggests that repeated delays in achieving communication milestones are associated with poorer developmental outcomes at age three.

This research used data from approximately 2,200 mothers and their children from the All Our Families study in Calgary. An interdisciplinary team of researchers at the University of Calgary has been collecting data about the participating families in order to examine parental well-being and child and family outcomes.

Mothers completed a developmental screening tool called the Ages and Stages Questionnaire at ages one, two and three years old.

Although current guidelines suggest that developmental delays, including language delays, be diagnosed by age three, most diagnoses don’t occur until age four or five. At this point, many children are already in preschool or kindergarten, a time when learning disparities in language skills can have long-lasting consequences for social skills and academics.

Early identification of delays can help reduce these educational disparities, as research suggests that early interventions for infants and toddlers with language delays are effective at reducing delays by preschool age.

Milestones by the ages

One aspect of the Ages and Stages questionnaire used in this study assesses whether children are meeting six expected milestones related to both verbal and nonverbal communication at each age.

For example, at age one, a child would be expected to be able to say about three simple words, like “mama” or “baba.” At age three, a communication milestone might be saying three- or four-word sentences.

Mothers also completed a 100-word checklist of their child’s vocabulary at age three and reported whether their child had been diagnosed with a developmental delay or referred to a speech and language pathologist.

In all of our analyses, we controlled for factors known to influence language development, including socio-economic status, gestational age at birth, child sex and a family history of language delays.

About 13 per cent of children could be classified as “late bloomers,” with low scores at age one that continued to improve over time, matching the “typically developing” group by age three. Although these children were meeting most of the communication milestones at age three, their mothers reported that the children in the “late bloomer” profile only knew on average 52 words on a 100-word checklist, compared to 75 in the typically developing group. 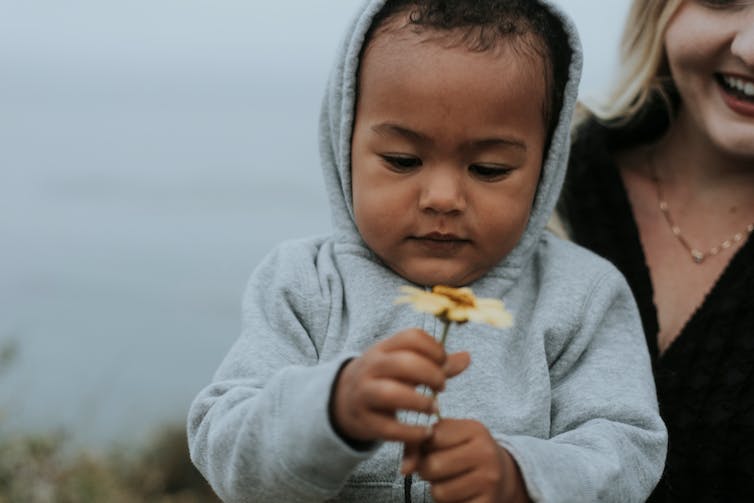 About 13 per cent of children could be classified as ‘late bloomers.’ (Shutterstock)

The next two groups either failed to improve or actually fell further behind their peers over time. These two groups also had the poorest developmental outcomes at 36 months.

Finally, about 1.5 per cent of children could be classified as “impaired,” only meeting about half of the expected milestones at one year and then falling further behind at two and three years old. This group of children only knew two words, had a 56 per cent likelihood of being diagnosed with a developmental delay, and an 84 per cent likelihood of being referred to a speech language pathologist by age three.

How repeated screenings can help

Importantly, this study shows that the vast majority of children meet age-appropriate communication milestones. Additionally, children who showed initial lags in communication at age one were likely to catch up over time.

However, children who did not improve over time had significantly smaller vocabularies at age three. They were more likely to be diagnosed with a developmental delay and/or have received a referral to a speech and language pathologist.

These findings suggest that repeated screenings would likely be beneficial for children who fail to meet all or almost all expected early communication milestones. A lack of improvement over time could help identify children early on who are most at risk for persistent problems with communication and language.

Further, repeated screenings could be particularly beneficial for those showing “stagnant” scores, as their scores were moderate as opposed to very low at each age. This group of children had lower vocabularies at age three, but their moderate scores could mean they would be less likely to be identified for language problems and receive help at an early age. This group of children also had the lowest average family income of all four groups, which could further impair their ability to access intervention resources.

Language milestones matter not as the final word, but as possible signals about where children might be struggling and how they can be best supported to reach their full potential.