The University of Calgary is welcoming two more Schulich Leaders this fall.

Allison Guthrie is a recipient of the $80,000 Schulich Leader Scholarship. A graduate of École Secondaire Notre Dame High School in Red Deer, Guthrie is enrolled in the Faculty of Science.

“Schulich Leader Scholarships are the largest science, technology, engineering and math (STEM) scholarships in Canada,” says program founder Seymour Schulich. “With 50 outstanding students selected in Canada each year it is all but guaranteed that this group represents the best and brightest Canada has to offer.

“These students will make great contributions to society, both on a national and global scale. With their university expenses covered, they can focus their time on their studies, research projects, extracurriculars, and entrepreneurial ventures. They are the next generation of technology innovators.”

Guthrie and Dupre Sarmiento join six other Schulich Leaders currently studying at UCalgary. Both were both thrilled to have been selected for this prestigious award.

Allison Guthrie is a recipient of the $80,000 Schulich Leader Scholarship.

"I was keeping an eye on which universities were sending their acceptance letters. UCalgary had sent their science offer and, a week later, I got a call. I was trying not to get my hopes up because I'd already counted myself out,” says Guthrie, adding that the call came as a shock.

“I cried. There was a lot of screaming in the Guthrie household that day.”

“The news came as a great surprise,” says Dupre Sarmiento. “I was really excited about it because the Schulich Leader Scholarship is so coveted and comes with so many benefits besides the monetary side of things. Receiving the news means that I can dedicate more time during university to what really matters. It will open up so many doors for me throughout university, and I can’t wait to get started.”

Becoming a Schulich Leader opens up many opportunities for students. Schulich Leader Tingting Yan, who was awarded the President's Award for Excellence in Student Leadership when she graduated this past June, studied in Singapore and did field school in India — allowing her to see health care applied outside the Canadian context.

Fourth-year engineering student Manpreet Deol did research in southern Germany and Shanghai, created her own startup company and, with a team of other UCalgary students, won an international engineering and commerce competition.

Elian Dupre Sarmiento is a recipient of the $100,000 Schulich Leader Scholarship.

“Being a part of the Schulich Leader community means a lot,” says Dupre Sarmiento. “The biggest thing is becoming a part of a group of STEM leaders across Canada. The foundation has tons to offer in support throughout university and afterward. I’m most excited about growing and developing my interests for technology and engineering as a future career through the Schulich Leaders community.”

Guthrie is particularly interested in research and has been itching to get back on campus after spending six weeks in Dr. Derek Toms’s lab last summer through the Alberta Innovates Heritage Youth Researcher Summer (HYRS) Program.

“It's huge,” she says. “The opportunity to be a Schulich Leader gets my foot in the door and gives me credibility to be able to do the research and help the people I want to.”

Both Guthrie and Dupre Sarmiento are involved in extracurricular activities and say they want to join clubs on the UCalgary campus. Guthrie sings in the Ihana Youth choir, is a member of student council and president of the science club at her school, and Dupre Sarmiento is a flight sergeant with Air Cadets, Rotary Club of Canmore, and was on his school’s International Genetically Engineered Machine (iGem) team for two years.

Both students’ parents are proud their children were selected for the scholarship.

“It's one of those things where you don't know what it's going to mean for her future,” says Suzanne Guthrie. “It’s really exciting to think she has that journey ahead of her. We're super proud and excited to see what this will mean for her future.”

“Getting the news was like a dream coming true,” say Dupre Sarmiento’s parents, Arelys and Roberto. “We are so happy for our son. Elian did study hard, often having to make difficult choices and let go of fun stuff to keep on with his academic obligations. The Schulich Leader Scholarship will enable him to advance his undergraduate studies in engineering and then share that knowledge with others.

“A special ‘gracias’ to the University of Calgary and the Schulich Foundation for making this possible. Not to be forgotten are Elian’s teachers and mentors; they always believed in Elian’s potential, and that was a decisive factor in our son’s success.”

Ahead of their arrival on campus this fall, Guthrie is taking time to do some of the things she loves best — hiking, reading, running and playing piano — while Elian is going to Regina for more flight training and to Montreal and Cuba to visit extended family. 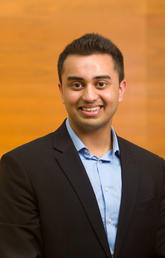 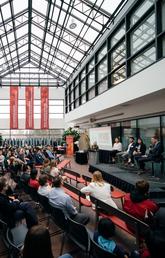 Haskayne announces $100,000 student scholarship, the largest ever for the business school