Neither. The new tech-led Platform Innovation Centre officially opens in June, but we couldn’t wait. Here’s a peek at what’s going on under the 503 sun-kissed parking stalls.

As parking lots go, the one on 9th Avenue S.E., next to Calgary’s downtown railway line between the Central Library and Studio Bell, was nothing special.

Long and skinny, it was just a surface lot until the Calgary Parking Authority decided it wanted more. Much more, it turns out. One of its many early iterations included a brewery but that changed when the Calgary Municipal Land Corporation (CMLC), acting as a broker, began nurturing the idea of marrying a parkade with Platform Innovation Centre, Calgary’s new $80-million hub for innovators.

Designed to bolster the collaboration of tech ideas with advisors, investors, partners and shareholders (the University of Calgary being one), Platform is Calgary’s newest home for tech start-ups with workspaces for 450 people. Measuring some 440 ft. long by 40 ft. wide, the glittery new structure is long and skinny and boasts a hole in the middle, like an elongated donut. Not only was the lot’s shape a challenge, admits Kate Thompson, MArch’02, president and CEO of CMLC, but the seven-storey structure was further complicated by having to be built over the LRT and next to the tracks.

Dubbed “innovation architecture,” Platform’s project manager, Christina Stevens, explains her team studied 17 innovation centres around the globe, as well as numerous startup cities, examining what kind of building could advance a city; what shape fosters a cross-pollination of ideas; what design can spur spontaneous encounters; and what would keep recent post-secondary grads and local talent in Calgary.

“What was great was discovering, after all that research, that what we were inheriting (an oddly shaped parking lot) would have been what we would have built intentionally, anyway,” says Stevens. 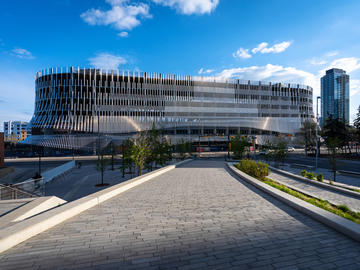 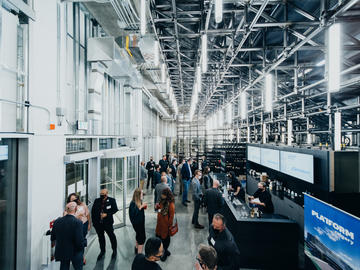 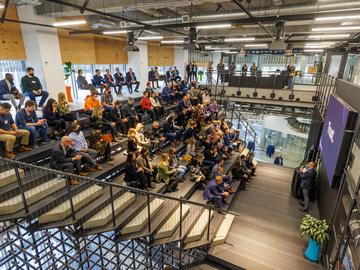 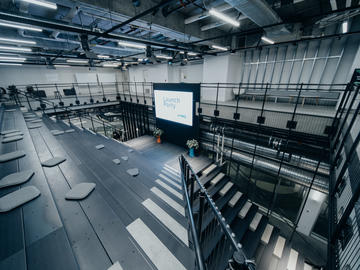 Let’s take the wraps off Platform — something the public will be invited to do at the official June 4 opening, and long afterward.

Here’s what might happen on a typical day: As you enter off 9th Avenue, a coffee concierge will greet and guide you, along with a cuppa, over to an open area for an informal chat. If you have an idea for a startup, they may ask where you are in your entrepreneurial journey. Do you need guidance from other entrepreneurs, industry experts, investors? Do you need to hone your pitch, raise money? Perhaps you want to participate in a program? (Currently, its 14 programs cover everything from the needs of early-stage startups and those of foreign graduates who are looking to launch a business in Alberta, to highly specific programs like Reverb, which is aimed at pre-scale-up tech companies in the music industry.)

With 65 active partners — from Innovate Calgary and one of the world’s leading Agrifood companies (SVG Ventures| THRIVE) to UCalgary’s Hunter Centre for Entrepreneurship and Innovation, Zinc Ventures, Alberta Enterprise Corp., and more — early-stage entrepreneurs (a.k.a. founders) have access to an extensive network of skill-builders, personal advisers, top talent and investors.

“Think of us as matchmakers,” grins Stevens. “Let’s say we think the Hunter Centre or Hub is where you belong, we’ll introduce you to a person there and perhaps set you up to take a class. These spaces (at Platform) are malleable and are owned by the entire city. We want everyone to use them.

“We keep hearing stories of the talent crunch and how we need more people in the tech space, especially in a growing ecosystem like Calgary. So, the post-secondaries are the crux point of that . . . we want young people to drive by and say, ‘That’s where I want to be.’ We want students to know what’s possible in Calgary, so they don’t need to move to Montreal.

“You can do something super-cool right here. That’s really the endgame.”

Because founders share this space with investors and business partners, they can easily bounce ideas and experiments off one another, adds Stevens, explaining the importance of the building’s pitch theatres.

“The moment someone pitches is very critical,” she says. “Think of it as their graduation moment . . . they are crossing the stage to get their cap. And we want the public to be part of that experience, so we intentionally moved the pitch stage to street level so people, let’s say at the library, can see activity happening here.”

Beyond the glass walls girdling the monochromatic pitch area (designed so the one who is pitching truly pops against the slate backdrop) are a series of bright workspaces and small boardrooms, an educational zone with formal classrooms for post-secondary programs, small sound-proof phone boxes, a massive open area, sliding partitions — in other words, a very flexible design that facilitates spontaneous social and professional exchanges. Topped by generous open ceilings exposing trays of cables and walls of natural light, it’s got a stripped-down, garage-like feel.

The flexible design by Kasian and 5468796 Architecture extends beyond the needs of Platform, which was after a “campus feel that was edgy and new,” says Thompson. The sustainable, future-forward solution? Build a parkade for 503 vehicles that includes ceilings that are 1.5 times the standard height of 2.7 metres, allowing for the mechanical wiring that would be required should it ever be converted into office spaces or residential condos. “We also flooded the parkade with natural light and used simple materials (distinctive aluminum pickets) that allow the shape of the curved building to reflect those materials.”

Stevens adds this fun fact: “Seventy-five per cent of the service providers behind this project have been locally sourced,” pointing to the sliding walls that were designed by DIRTT (co-founded by UCalgary alumnus Geoff Gosling, MEDes’92).

Watching Platform evolve is what inspired Jenny Conway Fisher, BFA’99, to leave her position as director of communications at the Glenbow Museum. “It was a dream job,” says the fine arts grad (who also worked as a marketing specialist at UCalgary’s Qatar campus for three years). “But I, like most Calgarians, love the idea of opportunity. Whether it’s volunteering or creating an art gallery or building a startup . . . there’s energy in this city. And in this irresistible building.”

As the building’s official opening gets closer, Conway Fisher, now Platform’s director of brand and marketing, is being coy with its plans. Entrepreneurs may pitch ideas to kids, clutching fistfuls of fake money, who are pretending to be Dragons’ Den dragons. The parkade’s rooftop will certainly be used as some sort of festival space. The keynote will likely be a controversial figure (some are gunning for Google whistleblower and AI expert, Dr. Timnit Gebru, PhD). There will be artists, tours and food trucks and . . .

The day, like this parkade/building, has infinite possibilities. “There’s no prescription to Platform,” says Thompson. “The city now has a collision space with enough square footage to create absolutely anything. What comes next is up to Calgary.”