How to encourage the occasional voter to cast a ballot

Despite a cumulative increase of nearly 10 per cent in voter turnout in Canadian federal elections between 2008 and 2015, the country’s voter turnout rates remain moderate. And they’re about 20 per cent lower than they were before the 1990s.

This current rate means governments are being formed with the support of a minority of the population.

While encouraging political participation to young voters aged 18 to 34 has been somewhat successful, two problems remain as a Canadian federal election approaches:

1) Young people still vote at a relatively lower rate than older voters did at their age;

2) Political socialization efforts via education systems do not target voters aged 35 to 54, so the rate of abstention in these groups remains constant.

Voter turnout campaigns are often produced by organizations and people that consider voting and political participation as acts that are required of any citizen in a democracy. 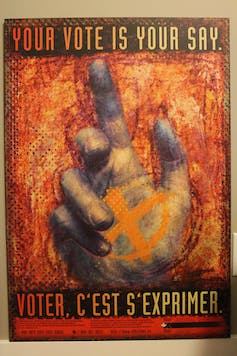 An example of a voter turnout campaign in the 1990s that didn’t appeal to some occasional voters. Elections Canada, Author provided

But their target audience of non-voters probably don’t feel the same way. According to my preliminary research, non-voters perceive such campaigns as insincere moralization drives — some believe there’s a political involvement and what politicians really want is people voting only for them, not their opponents.

So what can be done to improve how to communicate the importance of voting to non-voters?

My research suggests the solution lies in changing the messaging. Instead of arguing that voting is a moral act or a manifestation of a civic duty, we should encourage non-voters to think independently about the personal benefits and motivations of participating in elections, and to come up with their own reasons for wanting to vote.

Anyone who engages in public conversations about voting should be trained to consider these arguments, instead of the moralizing that may come more naturally to them.

Based on my findings, I propose five basic recommendations that may improve the effectiveness of non-partisan campaigns aimed at encouraging voting, mostly among a segment of the population called non-habitual voters — people who vote only occasionally:

This recommendation is especially important to multi-national non-governmental organizations, such as Rock the Vote or other civil engagement groups that run campaigns in multiple countries.

2) Non-habitual voters shy away from factual statements — which they perceive as condescending and preachy — and react positively to open-ended questions that invite them to think and discuss matters on their own terms. 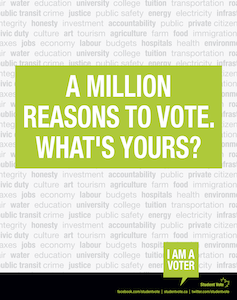 An example of a positive campaign, and a clean, simple display, favoured by occasional voters. StudentVote.ca, Author provided

The wording of voter turnout slogans should also be positive, rather than negative, so the occasional voter doesn’t feel they’re being guilted into voting. Negative language will only make non-habitual voters feel guilty, and slogans like: “If you didn’t vote, don’t complain,” are among the worst things they can be told, my research determined.

In contrast, a StudentVote.ca slogan: “A Million Reasons to Vote. What’s Yours?” is a positively worded question that received the best reactions from voters and non-voters alike.

3) Non-habitual voters react better to language that does not address elections specifically (think, imagine, wish) than they do to language that is more political (choice, count, vote). Indirect wording encourages interaction, engagement and consideration of the appeal, while direct language is perceived as empty promises by voting advocates.

To illustrate this point, consider a typical non-voter’s response to the slogan “Your Vote is Your Say” — a 1990s Elections Canada poster. In my research, a 39-year-old woman from southern Alberta had this to say about the ad: “Like they really care what I think.”

4) Simple, straightforward designs work best. My research findings are consistent in showing that many people, not just occasional voters, prefer clean and comprehensible designs over visually complex ones. As well, voters aren’t fans of whimsical word puns. That’s not to suggest people don’t want to see images or symbols at all, or that all wordplay should be dismissed. They just need to be used in moderation.

5) Countries like Canada that have ballots should stop using an X and instead use a check mark, both on the ballot itself and in their marketing materials, and allow any marking on ballots. Too many people associate the X with incorrect answers during their school years. In the split second it took my research participants to scan imagery, on the ballot or in marketing materials, many of them made a negative association.

These five principles are the most basic ones to adopt. Any organization — elections agencies, NGOs, even family members trying to convince loved ones to vote — should use them.

Thanks for reading! We can send you The Conversation’s stories every day in an informative email. Sign up today. 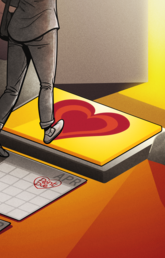