When it comes to the cardiovascular system, the importance of the nano-sized particles called exosomes, can’t be overstated. Although tiny, exosomes, like RNA, DNA and proteins, are responsible for sending complex messages between the cardiac cells. As such, they play a critical role in the heart’s function and repair.

Several projects are underway in the lab, including a CIHR-funded investigation into the endothelial progenitor cells, which are important in the formation of new blood vessels. These cells play a key role in repairing the cells after an injury, such as a heart attack, and are dysfunctional in individuals with diabetes.

When an individual suffers a heart attack, cells called fibroblasts create scar tissue to minimize the immediate impact of the cardiac injury. Although the scar tissue is important in the short term to avoid rupture of the heart’s cells by strengthening the cell walls, it increases the risk of heart failure in the long term, especially in people with diabetes, for whom the risk of heart failure doubles.

Patel’s lab is working to pinpoint the key molecules responsible for promoting the formation of new blood vessels, a process called angiogenesis, and limiting cardiac fibrosis, in hopes of controlling scar formation. The goal of the project is to decrease the risk of heart failure.

The lab has identified 11 messenger particles, known as microRNA, as being potentially “very important” to the angiogenic process. After injecting these particles into the failing heart in diabetic mice models, the lab has found two proteins in the heart that are targets of the messages sent by the progenitor molecules after injury.

Patel hopes to create a novel therapy that works on these target proteins by injecting molecules engineered to help promote angiogenesis and control fibrosis after heart attack.

“Doing so would avoid all sorts of negative effects in the heart,” he says.

So far, Patel’s research is very promising in mice. The next step is to investigate how humans react to the injection of these particles.

Dr. Vaibhav Patel obtained his PhD at the M.S. University of Baroda, India in 2011 and a postdoctoral fellowship at the University of Alberta. He is a basic researcher in the Department of Physiology and Pharmacology and a member of the Libin Cardiovascular Institute. 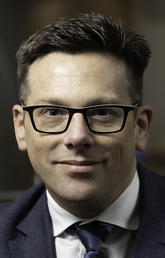