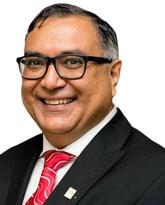 Rishi Nagar is a teacher and a journalist and presently the News Director at Red FM 106.7, a South Asian radio station in Calgary.

Rishi joined the Arya College for Women, Nurmahal, Punjab, India as a Lecturer in English and was promoted to be the Principal. After serving as such for more than six years, he switched his career to journalism. He served as a journo for about seven years. He also joined the Indira Gandhi National Open University as a Lecturer in English and served the post-graduate department for five years.

Rishi moved to Canada in 2009 as a landed immigrant and joined the South Asian Broadcasting Corp; Red FM 93.1 in Surrey, BC as a News Broadcaster and Host.

Opportunity arose and Rishi was transferred to Calgary in 2013 as News Director and Prime Time Show Host.

A completely secular and religious, exalted and humble, dynamic and calm, Rishi is a fearless journalist, was an excellent and very popular teacher and presently an objective political analyst. He transcended the boundaries and obstacles that came his way in the course of his remarkable life and he did so with grace and humility.

Rishi currently serves on the Board of Directors, Saddleridge Community Association, Calgary and as a volunteer for a number of organizations.

He feels honored to be on Senate and desires to serve the community he comes from and wants to spread the glory of the University as its ambassador.

He lives in Calgary with his wife, Renu and an adult son, Amiteshwar.