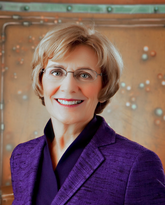 Dr. Arlene Ponting has more than 35 years of experience in various leadership roles.  Arlene is President Emerita of MindFuel, formerly Science Alberta Foundation, having served as the CEO of that organization for 13 years.   Previous roles include Consultant with Educational Resources, Southern Alberta Institute of Technology; Director of Continuing Pharmacy Education, University of Alberta; and Coordinator of Drug Information and Pharmacist, Misericordia Hospital, Edmonton.

Arlene is currently a member of the Steering Committee for Age-Friendly Calgary, City of Calgary and a member of the Board of the Calgary Branch of the Canadian Association of Retired Persons.  She was previously a member of the Space Advisory Board, Industry Canada; the National Science and Engineering Council of Canada (NSERC); the Alberta Environmental Monitoring Evaluation and Reporting Agency Board, the Calgary Chamber of Voluntary Organizations Board; and the Alberta Selection Committee for the Rhode Scholarships.

Dr. Ponting was selected by the Canadian Board Diversity Council as one of Diversity 50 - “Canada’s Most Board Ready Candidates of 2013”; by the Women’s Executive Network as one of Canada’s Top 100 Most Powerful Women in 2009, 2010, and 2011; by Alberta Venture as one of the top 50 Most Influential People in Alberta in 2008; and was a recipient of the Alberta Centennial Medal awarded by the Province of Alberta in 2005.

Arlene looks forward to working with members of the Senate to achieve positive results for the University of Calgary and the community that it serves.