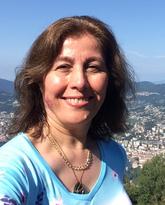 After completing her B.Sc. and M.Sc. studies at the Sharif University of Technology in Tehran, Farideh received a MONBUSHO scholarship from the Japanese Ministry of Education in 1993. Through this program, she learned Japanese at the Yokohama National University, and participated in research at the Institute of Molecular Science in Okazaki, before moving to Tokyo in 1994 for three years of Ph.D. studies in Professor Yutaka Fukuda Lab at the Ochanomizu University.

With the scholarship support from Sweden, Farideh started a post-doctoral fellowship in the Royal Institute of Technology (KTH) with Professor Magnus Sandstrom in1997, when she learned about X-ray absorption spectroscopy (XAS) with synchrotron light, which resulted in another Ph.D. thesis in 2000.

In June 2000, Farideh immigrated to Canada before taking a Research Associate position at the Stanford University, USA, in Professors Britt Hedman and Keith Hodgson Lab in August 2000, when she learned about advanced features of XAS, and sulfur X-ray absorption near-edge spectroscopy. In July 2002, Farideh became faculty member at the Department of Chemistry University of Calgary. Being committed to excellence in research, teaching and learning, she has given several invited workshops on XAS data analysis in North America, Europe, Middle East and Japan.

In accordance with her great respect for different cultures and beliefs, Farideh recently completed the online certificate program on "Diversity & Inclusion" offered by the Cornell University.